For generations, chlorine has been the sanitizer of choice for swimming pools. No matter the size, shape or location of a given pool, unwieldy bags of chlorine have traditionally been as much a part of its upkeep as skimmers or drain covers.

But while chlorine itself is as important as ever for keeping pools clean and sanitary, recent years have seen a major improvement in how it’s created and managed. Salt chlorination is becoming much more common as an alternative to the practice of mixing pure chlorine with the water. This modernization is allowing pool owners to avoid storing chlorine and hauling it out to the pool whenever needed, and the common complaints of skin irritation associated with high levels of chlorine (as well as its smell) are also quickly fading into the past.

How does it work?

We spelled the out the science of electrolysis in a previous blog post. The basic idea is that a salt cell, which is attached inline to the pool’s plumbing returns, takes in saltwater and, with the help of an electrical charge (electrolysis), converts molecules of salt (sodium chloride) into hypochlorous acid, a mixture of hydrogen and chlorine gas. This eliminates the need for manually adding chlorine to the water. 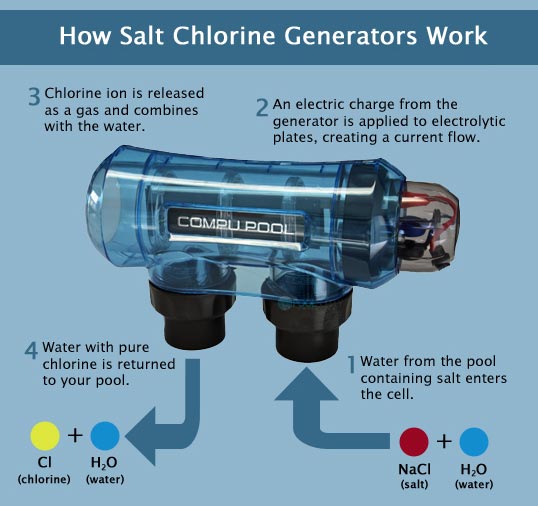 It also means that at any given point in time there is both chlorine and salt in a saltwater pool. A common misconception is that the salt itself is keeping the pool clean and chlorine is no longer present - as we said, chlorine is as necessary as ever. A big advantage of electrolysis is that it’s also a reversible process, meaning chlorine will convert back to salt, thus reducing (though not eliminating) the need for adding salt over time.

The other essential part of a salt system is the power center, which provides the current that allows electrolysis to occur. The salt cell and power center are often bought together as a package, though there is another way to power the cell, as we will discuss.

What are the real advantages of saltwater?

Like we mentioned, salt systems eliminate the need for buying as well as storing chlorine, a bulky and fairly hazardous chemical with a strong clinical smell, around the house. But there are plenty of other reasons to switch to saltwater.

First, many swimmers prefer the softer feel of saltwater over the often irritating effects of free chlorine, such as red eyes and discolored hair. Many people associate saltwater pools with the experience of swimming in the ocean, but ideal pool salt levels are only roughly 10 percent (3,000-4,000 parts per million) of those in open saltwater, so such comparisons are not realistic.

Another strong motivation for switching to a salt system is that less maintenance is generally required for the pool. Not only is the need to manually add chlorine to the water eliminated, the salt cell (shown attached to a pool's returns below, between the filter and pump) handles a major part of upkeep by measuring the level of salt automatically. The power center's digital readouts alert the owner whenever there’s a problem. 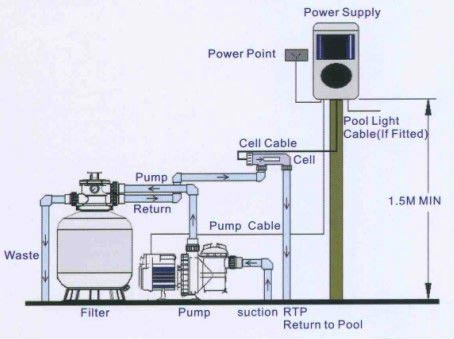 Is it worth the upfront cost?

Buying a salt system (consisting, again, of a salt cell and power center) such as the Pentair Intellichlor or the Hayward AquaRite and having it professionally installed will generally cost a minimum of $1000, and that doesn’t include the expense and burden of handling the salt itself when initially converting your pool from free chlorine.

Traditional chlorine pools, in addition to the drawbacks we already discussed, typically require more supplemental chemicals such as stabilizer (cyanauric acid), to help keep it from evaporating in direct sunlight, and algaecide, particularly in the heart of summer. These generally add up to about $500-600 per year for areas with extended swim seasons.

By contrast, an average residential pool only needs about $120 of salt when first switching to saltwater chlorination and generally about $30 annually thereafter (most experts agree saltwater requires far fewer chemicals to maintain optimal swim quality). Plus, salt systems are legitimate investments when you consider better swimming conditions and less time spent on maintenance. They’re also one of our best-selling categories, as pool owners clearly are seeing that the advantages to saltwater reveal themselves many times over in the long run.

Another way to leverage the initial cost of a salt system is to instead buy a larger automation package, such as the Pentair EasyTouch Intellichlor system, which itself includes a salt cell. This is an all-inclusive way of controlling essentially every element of your pool setup, including lights, pumps, heaters and valves (remotely turning the lights off or heating your pool or spa ahead of time, for instance), and comes standard with a cell which uses the EasyTouch console itself for its power. The EasyTouch thus offers all the functionality of a standard salt system and much more.

Check out our video on the many benefits of automation.

How do I actually convert my pool to saltwater?

The process of installing a salt system (if automation isn't in your short-term plans) is really fairly simple. There are units for various pool sizes – Pentair’s Intellichlor, for instance, has separate models for pool volumes of 20,000, 40,000 and 60,000 gallons. If you don't already know your pool's volume, the formula for determining it is straightforward:

Secondly, regular table salt (which is sold by the bag in hardware and home improvement stores) has to be added to the pool. Experts generally recommend 25 pounds of salt for every 1000 gallons of water to reach the desired mixture in parts per million, so our example pool of 30,000 gallons would need 750 pounds of salt! Remember, however, this is a one-time step and salt is much cheaper than chlorine (every bit as heavy, though). 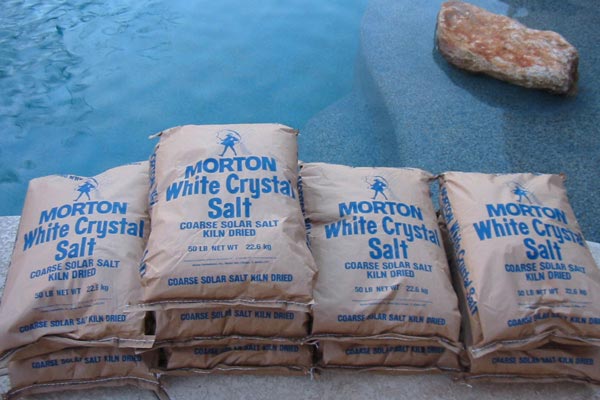 Only half of the salt should be added to the deep end of the pool at first, to avoid oversaturating the water (which would require draining the pool). Brush the pool bottom to keep salt from settling. Let your pump run as normal, then check the salinity 24 hours later and add salt as needed to reach the 3000-4000 ppm threshold. Once you’re convinced your levels are satisfactory, turn on the salt cell and consult the owner’s manual for operating specifics.
It's important to regularly check the pool's level of free chlorine when first installing a salt system. Most cells allow the user to adjust the amount of chlorine created in order to stay within the desired range of 2.0-4.0 ppm, so having an accurate measure of the level before switching over to saltwater chlorination allows you to tell the salt system how much chlorine it needs to produce to complete the initial conversion. The cell itself measures the water's salinity, but the pool owner is still responsible for monitoring the free chlorine level and adjusting the level of cell use accordingly.

Is saltwater a threat to my pool’s components?

Saltwater has a corrosive effect over time on lower-grade metals, such as aluminum, which are sometimes present in older heaters and older accessories like ladders and light fixtures. But generally, saltwater is no tougher on the pool’s pump, surface or deck than water with free chlorine.

A recent trend in the industry, in fact, is for products to be designated as “salt friendly”, basically meaning they contain stainless steel or at least no metals that would be affected by salt. If you have questions about specific elements of your pool setup, contact the manufacturer about their compatibility with saltwater. More and more, however, components are made to handle salt just fine.

One major consideration once you've made the transition to saltwater is the process of keeping your salt cell clean. We have several products available for the job, as well as this video of a couple of our pool professionals explaining the cleaning process.

The time is now

For some, there will always be comfort in the familiar, and the thought of moving away from standard chlorine pools is worrisome. For others, the commitment, both financially and in learning a new way of doing things, will keep them away converting to saltwater.

But cost is no factor in the long run, given that you'll be generating your own chlorine for years to come, and we routinely hear from customers delighted with their choice to switch to salt system chlorination.

We realize every situation is different, so don’t hesitate to call or email us with your questions about doing away with bags of chlorine once and for all.
One clear fact is that saltwater pools, for all the reasons explained above, are here to stay, and industry professionals made the switch to salt years ago in their own backyards.  Ours here at Pool Supply Unlimited, in fact, are eager to help you do the same.
And for some more background information, here's another of our own videos to help you get more comfortable with saltwater pools.
ABOUT THE STORE
Pool Supply Unlimited is an e-commerce company that loves water. We love to pump it, filter it, heat it, chlorinate it, light it up and stare at it while we're barbequing a fat, juicy steak. There are real pool professionals working here. Our guys have seen thousands of pools in their careers, no exaggeration. We are based in Southern California and can land most products to your door (within the 48 contiguous states) in less than a week.