// Initialize Pentair / Channel Advisor Sales Reporting sTrack.initialise();
Home AquaFlo FloMaster XP2e | 56-Frame 230V 4.0 HP 3.0 OPHP 2-Speed | 05334012-2040
NOTICE: The pool & spa industry continues to face industry-wide shortages on many products that most vendors expect to last late into 2022. We're allowing items to be purchased so that customers who choose to wait will have their order shipped when product is available. Most vendors are not providing any ETA on when items will be available. WE WILL EMAIL YOU RIGHT AWAY IF YOUR ITEM IS BACKORDERED.

RELATED ITEMS
OVERVIEW
SPECIFICATIONS
Q & A
REVIEWS
FOR YOU
PARTS
RELATED ITEMS
OVERVIEW
FLO-MASTER™ XP2e
Greater flow rates with overall energy efficiency
Aqua-Flo by Gecko's Flo-Master™ XP2e pump is designed for today's large spas with multiple jets requiring increased flow. The XP2e pump fits within the same envelope as the original XP2 pump yet provides greater flow than its predecessor allowing spas to use more jets per pump. The energy consciousness of the XP2e pump allows for the same and greater flow rates while improving the overall energy efficiency of the spa, reducing consumer operating costs. 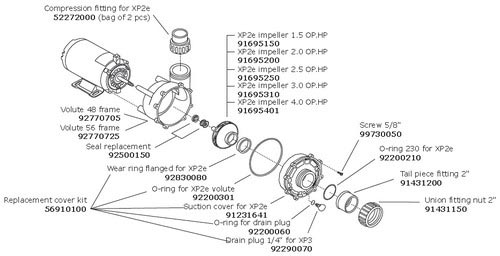 OP.HP REFERS TO OPERATIONAL HORSE POWER
If you have an older XP2 pump and the label only has the HP rating and not the OP.HP rating then the new style will be by the OP.HP.


If you have both a HP rating and an OP.HP rating on the label then the new style is the same.

XP2 pumps are 48 frame motors only now however, in the past there were some 56 frame motors used. These are replacement wet ends that have been used by the manufacturer. 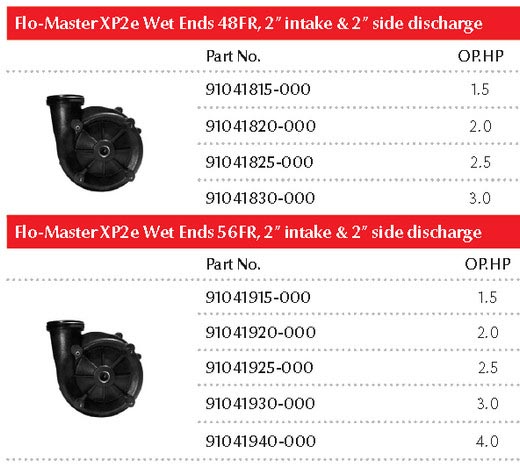 Every pump comes with 2 compression fittings & without cord.

Brand: GECKO
SPECIFICATIONS
Horse Power
4 HP
Speed
2 Speed
Voltage
230 V
Inlet Size
2"
Outlet Size
2"
Flange
Thru Bolt
Q & A
Powered by TurnTo
Questions that need answers | My Posts
Start typing your question and we'll check if it was already asked and answered. Learn More
Do not include HTML, links, references to other stores, pricing or contact info.
My question is about:

If your question is about more than one item, click + to add them.

over 2 years ago
Rated 5 out of 5
Great price, great product
I ordered this item will call so I could install it right away. The price was right and the pickup was easy as they aren't too far away from me. Highly recommended.
August 18, 2020
derek s
Purchased

1 year ago
Rated 5 out of 5
purchase
phone staff was very helpful in matching my pump correctly. Quick delivery, nice staff. Thanks William
February 9, 2018
william a
Purchased

CHOSEN FOR YOU
HABLAMOS ESPAÑOL

ABOUT THE STORE
Pool Supply Unlimited is an e-commerce company that loves water. We love to pump it, filter it, heat it, chlorinate it, light it up and stare at it while we're barbequing a fat, juicy steak. There are real pool professionals working here. Our guys have seen thousands of pools in their careers, no exaggeration. We are based in Southern California and can land most products to your door (within the 48 contiguous states) in less than a week.